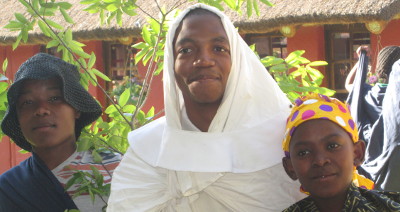 Hi Tebello, thanks for being ready to do this interview. Can you talk a little bit about yourself, where you come from, about your family and background?

Our family originally comes from Klerksdorp and we moved to Mafikeng due to my father’s work. We struggled a lot in the beginning, we did not have a house, we were living in a shack but over time my father managed to build a house. I am the second born child at home but my sister passed away when I was very small. I do not remember her. My parents and myself we belong to the Catholic Church every Sunday. I have started joining the youth group in the Catholic recently. We have moved a lot here in Mafikeng, that’s why I attended different schools. But when I came to High School ,my parents wanted me to go to St. Mary’s High School, which is close to our Catholic Church

What is important for you and why?

My parents encouraged me to be very serious about my education and I can see that this bears fruit. I like to go to school, I am passing with good marks and I enjoy being an ambitious learner.

Who are the people who have made a mark in your life and why?

The most important person in my life is my father. He encouraged me and motivated me when I failed a subject or when I felt down. He shared with me his own experiences. He even took pains to organize extra classes for Mathematics which helped me very much to grasp Maths.

At school my Maths teacher is the most important person, he helped me to understand Maths and he encouraged me not to give up.

Also the co workers of A Re Tshamekeng Bana ( support group for children living with HIV/AIDS) are important role models for me who made a mark in my life.

I have realized that you have special gifts and talents which do not go together often: you like Mathematics and Science and you have won a poetry award. How do these different abilities go together or come together in your life?

In 2011 we celebrated Youth Day on the 16th June as support group “A Re Tshamekeng Bana”; somebody suggested we should have a poem on the program. I volunteered although I had never done that before. When I came home, I sat down and asked myself what to do now. I thought for a long time and then I started writing a poem. When I finished it, I showed it to my mother; she did not believe me ,when I told her that I had written that poem. When the celebration of June 16 came I was a little bit nervous, but when I was called on the stage and I looked at all the people watching me, I felt very good and the poem came out easily and I could feel that there was a connection between me and the audience. I felt as if I had never done anything else than standing in front of people citing poems. It was a great feeling.

From that time on I wrote poems every day, it was for me something like writing a journal . I expressed my feelings and thoughts through them. One day I learned of a poetry competition. I applied, not knowing what to expect. I was invited to auditions and I was chosen to go to Johannesburg to represent North West in the competition. When I arrived there I was the youngest of the poets and I felt a little bit out of place because I saw very experienced people.

When it was my turn to perform on stage (it was the famous Market Theatre), I had the feeling that I was connected to the people listening to me. There was a big applause when I had finished. Finally I won the first prize on that day. That was most amazing to me.

Maths and poetry are like one coin with different sides: when I have to solve a Maths problem and I am stuck, I sit down and write a poem and I feel energized and refreshed. The same when I try to write poems but I cannot express myself as I want, I move to my Maths books and get new energy and new ideas.

6You are or have been a member of support group “A Re Tshamekeng Bana”. Who invited you and what attracted you to join?

I was invited by a school friends who had joined the group. When I came there for the first time, I sensed that this group was and is like a family. There are strong bonds between the members and I liked it. Although I have outgrown the group because of my age, I still feel this bond. This group and the leaders have encouraged me in my life and had a great impact on me.

What are your plans for the future?

T: Next I will finish my schooling and my dream is to go to the University of Cape Town to study Geology, I would like to work in the Mining industry because I think it is an important part of the South African industry and future.

My second choice would be becoming a Maths teacher because I see that a lot of children fail Maths because we do not have motivated and gifted Maths teachers. I have already started support classes for my peers at school who are struggeling with Maths, and I like it.

Thanks for the interview, Tebello!

If only…
If only I was a doctor,
I would heal your wounds faster
than the speed of a bullet.
If only I was an architect,
I would construct your house into a
mansion.
If only I was a musician,
I would sing you love songs to see you
smile again.
If only I was a pilot,
I would fly you to see the world.
If only I was a billionaire,
I would turn your dreams into
reality.
But…
I’m not a doctor,
but I can heal your wounds with
melodic rhymes of poetry.
I’m not an architect,
but I can construct your heart with
poetry to regain its confidence.
I’m not a musician,
but I can recite you love poems to
see you smile again.
I’m not a pilot,
but I can take you places if only my
poems can evoke your imagination.
I’m not a billionaire,
but surely my poems are the reality
of your dreams.
I may be a nobody to many,
but like Shakespeare I’m the inventor
of my success.
Poetry is my everyday bread and
butter,
I spread ink on a dry paper to give
it life.
My wealth is the audience,
to see them applauding is priceless.