This year is the 20th anniversary that our Action Group Tshepanang conducts a five-day workshop in spring. We are grateful that in the past twenty years there was not a single year where this workshop had to be cancelled.

But beside the anniversary this year’s workshop was very special since a new theme was introduced that is unfortunately in the headlines in the South African news almost every day: Gender Based Violence (GBV). In our country a woman is murdered every three hours, more than half of them by their intimate partner. That is five times more than the worldwide average. 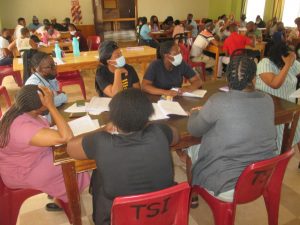 In this workshop that was held from 04.10. to 08.10. 2021 in St. Joseph’s Retreat Center in Mahikeng, 52 peer educators and one teacher were introduced to twelve newly developed lessons on GBV that they want to teach to students of 25 schools next year. Some of the lessons were demonstrated to the peer educators by mentors, others they had to prepare themselves in groups and then teach it to another group.

There are two underlying questions that the twelve lessons want to answer: Why are men doing this? And: why do women not report it? Mainly through stories the lessons want to shed light on the underlying causes of Gender Based Violence. Firstly, there is the high unemployment rate in South Africa that is presently around 32.4% and among the youth even higher than 60%. Because they have no income men cannot fulfill their roles as the head of the household and the provider for the family. The frustration about their powerlessness they express in becoming violent against their partners. Often alcohol abuse plays a role in this dynamic. Many men have deeply internalized stereotyped gender roles that men must be the sole providers of the family. When they cannot live up to this standard they despise themselves.

But even men that have a decent income can turn violent to demonstrate their power and because they have the desire to exercise full control over their partners. They feel that they are entitled to have sex with their partner whenever they want even though marital rape is regarded as a criminal offence in South Africa. Another cause for Gender Based Violence is alleged cheating. Often the slightest suspicion is enough to expose the partner to severe beating. Girls and women who became victims to GBV often keep quiet out of fear of being assaulted even more or because they are financially dependent on the perpetrator or because they do not want to bring the good name of the family into disrepute.

Our dream is that these lessons that shed light on the underlying causes of Gender Based Violence may help to mold a new generation of young men and women: men who know that they are real men even if they do not have an income and that mutual trust is better than power and control; women who are self-confident enough to report perpetrators of GBV because they know that keeping quiet will endanger their own future and the future of their children.

During the final evaluation of the workshop the peer educators expressed the keen wish to teach these new lessons in their schools next year. The majority opted for beginning the teaching already in Grade 5 and not only in Grade 7.

On Thursday night we celebrated that two Tshepanang members- Lesego Madola und Lucky Gumede- had obtained their ABET Certificate that enables them to study for a Bachelor of Education and to become teachers. It fitted well to the theme of the workshop that after long time these were the first men again who obtained this important qualification. They really have no reason to despise themselves.