A Workshop with Challenges

From the second to the sixth of July 29 members of our Action Group Tlamelang assembled in St. Joseph’s Retreat Center in Mahikeng to participate in the annual workshop of their group. 32 members had registered but three had to stay at home due to a severe flu. 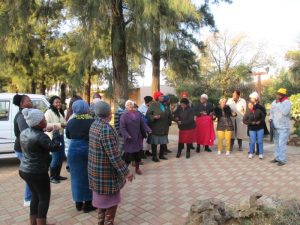 It was one of the coldest weeks in this years winter in South Africa. The electricity was off for almost the whole week so that the electric heaters to warm up the meeting hall could not be used. Because of our financial constraints we could only accommodate those participants in the center who came from outside Mahikeng. Those from Mahikeng had to travel in freezing temperatures from their homes in the morning and in the evening. But they were still better off than those who stayed in the center. Because of the electricity cuts not even water was available in the center as the electric water pumps did not work. But the participants were not overcome by all these obstacles. Wrapped in coats and blankets their endured the cold temperatures they followed all the presentations attentively and displayed lively participation.

The main focus of the workshop was on lessons that the child care givers will teach to the orphans and vulnerable children in the various forms of After School Programs of our organization. These lessons were presented to the participants by the members of our teaching team that was established last year. The presentations were done in a very captivating way. The lessons deal with four main challenges that the present South African society is faced with. Firstly, they deal with HIV prevention (as there are still 2000 girls and young women infected every week); secondly, they deal with child protection issues (as the rights of children are often neglected in South Africa). Thirdly the lessons deal with Gender Based Violence that affects many women in South Africa and fourthly they deal with stigma and discrimination against people living with HIV or PTB and the disabled.

The second focus of the workshop was to give the participants an update on the diagnosis and treatment of Tuberculosis and HIV Infection and on Sexually Transmitted Infections and Family Planning. Like in previous years all participates had to undergo a test on Tuberculosis and HIV infection. Compared to the previous year the results improved by 6.8% to an average of 75.8%!