a week of rain has turned South Africa in a green country again. This comes after a long standing heat wave with temperatures of 23° C at night and up to 40! C during the day where we longed to see clouds on the sky.

Most of the Tsibogang activities for this year have come to an end. On 09-13.12.2019 our support group for children with HIV held its educational camp at Haphororo Retreat Centre near Pretoria. Wolfgang Hermann is leading this camp with four of our co-workers. They had more than enough rain there until 12.12.19.

We are grateful that we could do most of our planned activities this year due to the donations that we received from you. 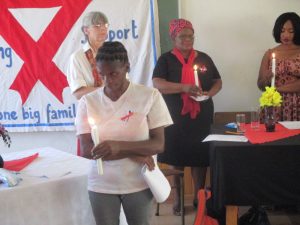 On 1. December, we commemorated World AIDS day and held our traditional closing function. On this day we remembered all who are living with HIV and are faced with the challenges of this condition as well as those who died from AIDS. Since 17 years our organization walks with the People Living with HIV and tries to support them. Antiretroviral Treatment is available in South Africa since 2004 and there have been noticeable improvements in this treatment during the last couple of years. Nowadays it is sufficient for most people to take one single tablet at night that contains three drugs.

In our organization we have members who have been living with the virus for 15 years who look after themselves and live a positive life. Like in previous years on 1. December we had someone from our organization who lives with HIV and told us her personal story. This year it was Esther who knows for 15 years that she is HIV positive and takes Antiretroviral Treatment since long. Her viral load is undetectable. She got married and thanked all Tsibogang members for helping her to accept her condition. 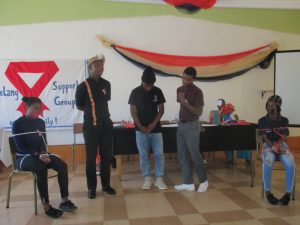 Young people perform a drama about the discrimination of people living with HIV.

There were different dramas that were played by the children of this year newly established After School Centre in New Bethel and by the members of our support group for children living with HIV that is called A Re Tshamekeng Bana. The dramas showed the discrimination that people living with HIV are facing and also dealt with gender-based violence. A slide show helped us to remember this years outstanding events.

Wolfgang Hermann gave an update how we are doing in terms of the 90-90-90 strategy in South Africa. We can say that now 90% of those who live with HIV know their status. That means that the first 90 aim has been reached in South Africa. But instead of 90% only 68 % of those who know that they are HIV positive have initiated Antiretroviral Treatment. Especially men are reluctant to take this decisive step and thus put their own lives and the lives of others at risk. Instead of 90% only 54% of all who are living with HIV have a completely suppressed viral load. This is achieved when your take your ART very regularly. That means in South Africa we are still far away from reaching the 90-90-90 aims that we are supposed to reach by 2020. There remains a lot to be done by our organization next year.

The keynote address on 1. December was delivered by Thandiwe Kabi from Aurum Institute. After a long struggle it was possible to sign a contract with this American funded organization. This contract envisages that 18 of our trained care workers will be directly involved in HIV testing again and in the all important initiation of Antiretroviral Treatment.