Last month two of our long standing co-workers passed away suddenly. Itsholeng Loving booked off sick at the beginning of June. The flu season had just started, it was cold. A few days later Kesentseng Nanyane also fell ill, she did have typical Covid symptoms and was confirmed to be Covid positive after a few days. Both passed always within less than a week. We are still dumbfounded, speechless, it seems to unbelievable coming to our office/centre without them being present. 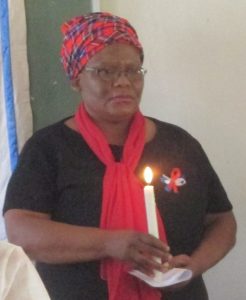 Both served our organisation with their different talents and gifts: Kesentseng was a project manager of Tlamelang, she worked in the office to handle lots of administrative work. Kesentseng served in the Tsibogang Management board as the treasurer of the organization and she was also visiting and advising the staff of four After school centres around Mahikeng. Sitting in the office also led to her role as counsellor and advisor for our members who came to the office.

Itsholeng was a member of Tsibogang Christian Action Group since 2004, she started as a peer educator, moved on to home based care, she was employed as a counsellor in the organization. Her gift to encourage people living with HIV/AIDS to take the ARV regularly and to disclose their status. She helped a lot of people in the self- help group Amogelang to change their perception of their HIV status. They encouraged others to start their own support groups in other places. It was Itsholeng’s initiative to begin a group for children living with HIV/AIDS more than 10 years ago. The group was called Let’s play children (A re tshamekeng bana): children between the age of 7-17 meet every second Saturday in the Tsibogang centre. They play together, do Bible studies, learn about the crucial ARV treatment and other important health issues. They eat together and share important issues of their lives. Through this group and the friendships which started there a number of children’s lives were saved because they learned for the first time why they had to take ARVs. The friendship within this group uncovered a lot of talent: poetry, dancing, singing. Almost all children improved their school results due to the encouragement which they received through the group. During the last two years Itsholeng was engaged in a project doing follow ups on patients who had left their TB/ARV treatment. She also conducted counselling sessions for our members on a regular basis.

Itsholeng and Kesentseng had mutual friendship and fellowship with a number of members of Tsibogang Christian Action Group. We shared so many experiences over the years. We don’t know how life will go on in Tsibogang without them, but we trust that God had his own plan and thoughts by taking them from us. Our thoughts are with their families and friends and all the children who they served. We take refuge in this verse from Jesaya 55,8 : “For my thoughts are not your thoughts,  neither are your ways my ways,” declares the Lord.

As South Africa is fighting the third wave of Covid infections, conflicts are brewing within the government and the ANC. The violence and looting which took place last week shocked the whole country and the world. Please pray for South Africa and her people that amidst this tensions democracy, respect and tolerance between the races and the different groups prevails.