In one of our preschools, in Lomanyane , we have a group of children who have been in the preschool since January who really benefitted from the Montessori approach. There is one boy , Kesaobaka, who knows all letters of the alphabet and has started reading already. We are so proud of this achievement. I was curious to find out, if his mother is aware of this. So I asked her if she would be prepared to come to the preschool for an interview and a photo session. 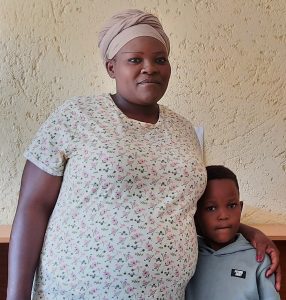 Ausi Puleng, what did you hear about the preschool before sending your child to our preschool?

For me it wasn’t a difficult decision to take, to send Kesaobaka to this preschool because my eldest son who is now in Grade 8 also attended this preschool. But I am aware that a lot of things have changed.

What made you to register him in this preschool?

I heard about Montessori for the first time in a parents meeting in the beginning of the school year in January. I was curious what the outcome will be.

According to your understanding what should a child learn at a preschool?

I think, that a child should learn new words and concepts and become aware of his/her own language. I am glad that everything is done in Setswana since this is the mother tongue of the children in this area. When children learn in their mother tongue , they will learn the second language easier.

Have you seen some changes in your child’s behavior since he attends this preschool?

Yes, Kesaobaka talks at home about what he has learned at the preschool. He was very shy in the beginning of the year but now he is socializing more with other children.

Kesa is a child who likes to explore things on his own. At times he refuses to be shown something because he is still busy with some work. According to the Montessori teaching , that is totally all right. But according to the way Batswana teach their children, it is not. A child should always agree and go along with the wishes of and adult. Are you having conflicts with him due to this at home?

Yes, at home we also we have that experience that at times he does not want to do something, especially when he is busy with something. But he is always polite and friendly, even when he lets us wait. Finally he is doing what we request him to do. I have also realized that he is more confident. He has learned a lot in these eight months at the preschool.

How do you see Kesa’s progress now, in how far has the Montessori way helped Kesa to be prepared to go to school?

Kesaobaka knows all letters of the alphabet and has started writing . He is able to count to 20 and recognize the numbers. I am happy that he has learned so quickly and I am thankful, that he can attend this preschool.

Thank you for the interview. I wish you and Kesaobaka all the best for the future. 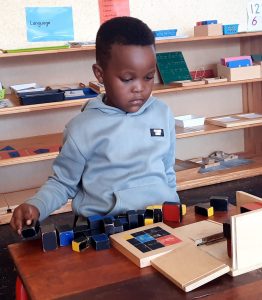 After the interview I called Kesaobaka and asked him, if he would like to show some of the material he likes to work with to his mother. He chose the Trinomial Cube which is a 3 D puzzle with 27 pieces , once unassembled looks as if it does not fit again into the cube. But it does. His mother and myself watched Kesaobaka taking all pieces out and in less than two minutes they were back assembled in the cube.

The benefits of Montessori education