The month of June is called the youth month in South Africa. 16 June is a public holiday in remembrance of the students’ uprising in Soweto in 1976. On this day hundreds of young people lost their lives when they marched against the decision to introduce Afrikaans as the medium of instruction in public schools. The police used life ammunition to disperse the peaceful march. It is a habit in many schools to conduct a commemoration of this event close to the public holiday in which the challenges that the youth of today are faced with are also discussed.

The men’s action group of Tsibogang Christian Action Group that was founded in May 2021 and that has the name A Re Ageng Morafe (Let us build the nation!) came up with the idea to request the school management of some schools where our Tshepanang Peer Educators are teaching to use this year’s commemoration to talk about the issue of Gender Based Violence. In total our members got permission to conduct an awareness campaign in five schools. Two of these campaigns I attended myself. 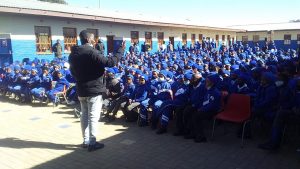 The first one brought me to the village of Sprinbokpan to Tsholofelo Primary School. An ice-cold wind blew into our faces when we arrived. The campaign had to be conducted in the open because the school does not have a suitable assembly hall. It took some time until all the students were assembled. Everyone was bringing his chair from his classroom. In total there were 670 students from 14 classes and in addition the teachers and members of the school governing body. A mighty chorus filled the air. Then Lebogang Masibi, one of the members of A Re Ageng Morafe opens with scripture reading and prayer. Now is my turn to speak. I realize how the eyes of the many children are fixed on me full of expectancy. There is a sound of amazement when they hear that I am speaking Setswana. I make them aware that many of them when they have finished school will probably not find work. This is the plight of every third South African. This is particularly hard for the men because it means that they will no be able to fulfil their role as providers of the family. I urge the boys not to despise themselves when this should happen to them. They should not fall into the trap of thinking that they are now no longer real men. A man without job is still a man! He can show this through so many constructive and creative activities. But many men are not doing that but rather project their anger onto their partners.

After my speech the Tshepanang Choir presents two powerful songs. Then Lucky Gumede, another member of A Re Ageng Morafe tries to explain why it is outdated nowadays to see the man as the only provider of the family. Other short speeches follow. One of the students presents a poem. One can feel how difficult it is for him to overcome his stage fright. A the end the principal presents a vote of thanks. Then a meal is served that was prepared by our Tshepanang but sadly not to the students but only to the teachers and the school governing body representatives. Our budget does not allow for more.

The second campaign I was able to attend took place at Bophirima Secondary School in Itsoseng on 21.06.22. 255 students from Grade 8 and 9 squeeze themselves in a small hall. I realize that the topic of Gender Based Violence is closer to these older students. Besides the speeches there is a long drama that was prepared by a group of students of this school. It is typical for many dramas here that it shows the sad and tragic realities of Gender Based violence in a rather funny and humoristic way. At the end the women and children affected by GBV die.

Do such campaigns really make a difference? Many of the attending children probably could only understand parts of the speeches. What is good is that in the first school the campaign marked the end of 13 lessons on Gender Based Violence. For those children that were exposed to these lessons maybe something is sticking in their minds.