Categories Menu
Home » Tlamelang Eng » We were looking for peace…

We were looking for peace…

…and we found it! That is how may be the experience of 22 Tlamelang Members who attended the retreat from 03.01. to 06.01.2019 can be summed up. But everything did not start peaceful at all. On the 1st of January in the evening we received a phone call where we learnt that we cannot come to the Haphororo Retreat Center as planned because the electricity transformer there burnt down and as a result they did not have electricity nor water in the whole center. Via internet we started to search for an alternative accommodation but we had little hope that we would succeed on such short notice. However, with the help of God Christel Lorato Hermann found Magalies Retreat Center. It turned out that they still had space for us and that their prices were affordable for us. 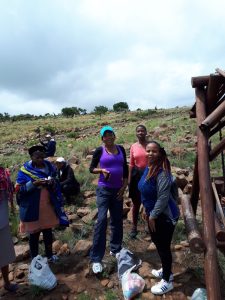 As a result on the 3rd of January we arrived at that center that is surrounded by the impressive Magaliesberg Mountains. The theme of the retreat was taken from the watchword of the year: “Embrace peace, don’t let it go away (Psalm 34,15). In our search for peace the meditation on 1. Peter 2, 4-10 helped us as did the Lectio Divina based on Philippians 4, 5-8 that were both followed by an intensive and personal sharing in groups. The hiking that led us to the top of a nearby mountain was for many an unforgettable experience. It was an experience of receiving inner peace.
Discussions on Gender Based Violence and on Stigma and Discrimination helped us to face the realities that often destroy the peace in our society and in our communities. Team building exercises and the very lively Sunday service enhanced the peace within our group so that we returned home with hearts full of peace.

A few days later we received the message that our long-term co-worker Ilse-Marie Matshediso Hiestermann had died in Germany. While Christel Lerato with Benedict and Linda Hermann boarded a plane to attend the funeral in Hermannsburg, Germany we conducted a memorial service for her in Tsibogang Center in Mahikeng on the day of her funeral. 30 people who had worked together with Ilse Marie in the local Lutheran Church and in Tsibogang Christian Action Group attended. Through the speeches of two of her former colleagues, of a representative of the medication group she attended and of Wolfgang Hermann and Undine Rauter as well as through the sermon held by Reverent Jack Mogale we vividly remembered Ilse Marie’s life here in South Africa. 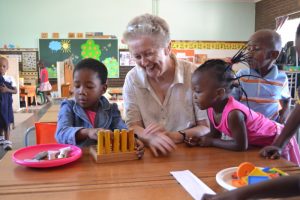 On 19.01.2019 we conducted a work shop for all co-workers of Tsibogang Christian Action Group that are involved in an After-School Program. Due to the generous donation by the firm HMS that is based in Heidelberg, Germany it is not only possible to continue with our established After School Projects but we can even develop our five new informal After School Projects further. These new informal After School Programs have been started last year on a purely voluntary basis under difficult circumstances. That means that the co-workers did not receive any stipend for their work and often lacked essential equipment. At one place the program was just conducted under a tree. In the meantime a proper house for all five centers could be identified. The remaining days of January we spent with buying chairs and tables for the new centers and delivering them to the various houses. That was quite a challenge because the new centers are situated far apart from each other. Setlopo, Modimola and Ikopeleng are villages in Mahikeng Sub-District with a distance of more than 30 km between them. Borakalalo is situated 80 km east of Mahikeng in the Lehuruthse area and New Bethel is situated 20 km south of Mahikeng in Ditsobotla Sub-District. In all these new After School Project a structured program will be established to help the 15 -40 attending orphans and vulnerable children with their home work in the respective grade that they are attending. By allowing them to participate in a math- test for each grade in February and October we want to see how many of the children will improve in this subject in each center. In addition, in each center special lessons will be given on HIV prevention, child protection, gender-based violence, stigma and discrimination and healthy nutrition. Sports and games and the telling of biblical stories are also part of the envisaged program in each center. We are eager to see in how far these ambitious plans can really be implemented in the coming months.