On 03.10-07.10.2018 46 Peer Educators of our Action Group Tshepanang assembled in the beautiful guest farm Kaya Inkalamo to hold their annual workshop. The discussions, presentations and lessons focused on three areas:

Firstly there was the spiritual question why God has not yet answered our prayers to give us new donors for our project. The main donor for the Tshepanang Project during the last 10 years, Else Kroener Fresenius Stiftung, had indicated to us that their funding cycle for us has come to an end.

The answer that the Peer Educators found in many discussions, bible studies and a divine service can be summarized as follows: God wants to test us and wants to see whether we remain faithful to our calling to teach children and youth about the important values in life and about HIV prevention strategies even though we receive substantially less money for that. He wants to see whether we practice what we preach.

It became clear to Peer Educators that next year they will only be compensated for teaching in one school. For many of them that means that they will receive R 700 (44 Euro) less per month which is equivalent to a third of their total income. Despite that several Peer Educators committed themselves to teach in a second school without receiving any incentive for that. 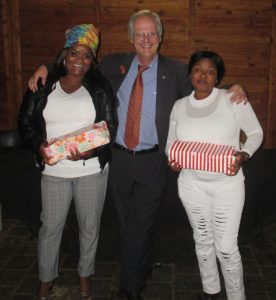 Wolfgang Hermann gives presents to two peer educators who taught at schools with excellent results in the test.

The second big focus of the workshop was to analyze the results of the KAB (Knowledge – Attitudes – Behavior) that we have conducted in August 2018 the schools where our Peer Educators were teaching. The tests related to the knowledge on HIV were written by 4387 students who attend grade 6-10 in all 29 schools. The average result of all schools was 78% which signals an improvement by 115 compared to the previous year.

The anonymous questionnaire on questions related to attitudes towards HIV and sexual behavior was filled by 2118 students from 15 schools. In the other schools the school management did not give permission for the study because of the sensitive nature of the questions contained in the questionnaire. The most surprising result of the study was that even though only 15 % of the students indicated that they ever have been sexual active 48% of them indicated that they would choose condoms as their preferred option for HIV prevention. 39 % chose abstinence and 13% “Be Faithful”. In the age group 10 -13 years 52% opted for abstinence, 10.4 % for “Be faithful” and 37.6% for condoms.

Apart from the revision of the HIV prevention lessons the third big focus of the workshop was to familiarize our Peer Educators with nine new lessons on values. These lessons were based on stories from the newly published book from “Heartlines” (a Christian NGO in SA that publishes films and books on values) with the title “Stories that talk II”. Some of the lessons were presented by the mentors, the others the Peer Educators had to prepare themselves in groups. One of these lessons deals with xenophobia that is an increasingly hot topic in South Africa.

At the final evaluation session most Peer Educators expressed great satisfaction about the way the workshop was conducted.